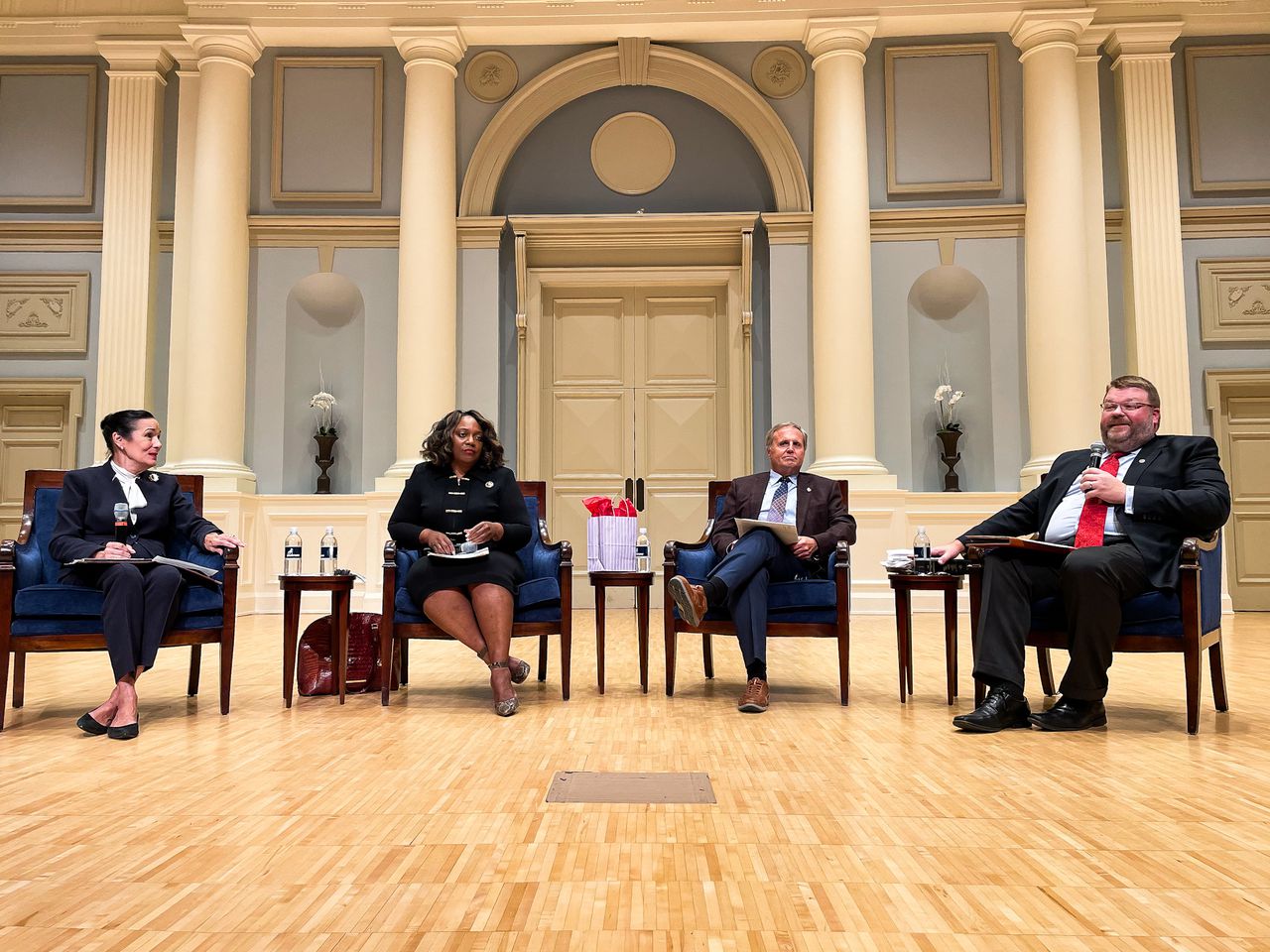 A panel discusses the recompilation of the Alabama constitution at an event hosted by the public Affairs Research Council of Alabama on Tuesday, Oct. 18. (Jacob Holmes/APR)

Alabama voters will have a historic opportunity at the polls on Nov. 8 to ratify a recompilation of the state constitution.

The Public Affairs Research Council hosted a panel discussion Tuesday at Samford University with key leaders in the effort to reorganize and remove racist language from the archaic document.

Alabama voters in 2020 cleared the way for the recompilation to be put on the ballot in 2022, and the recompiled constitution gained unanimous support in both chambers of the Legislature.

While the changes would not affect any substantive area of law, the panel said removing racist language that is no longer enforceable will help the state move away from its bad branding across the globe.

“We suffer from a brand image around the world,” Garrett said. “So I’ll say this, we’re here to update our constitution to move us away from a past that we all regret. That’s important in helping us rebrand and tell everybody who we are today.”

“And right now it says our value system disenfranchises communities of color, not just African Americans but all communities of color,” Coleman said. “those folks that don’t own land, poor people and women, and also people who choose to love whoever they want … So I don’t believe that’s the Alabama that we are today. And so this is the right time to not only say to the rest of the country, but to the world, that we are no longer that 1901 Alabama.”

In addition to removing racist language including the segregation of schools by race and the enforcement of poll taxes, the panel said the recompilation will also reorganize the constitution to make it slightly less cumbersome to navigate.

Othni Lathram, director of the Alabama Legislative Services Agency, explained how the 1901 constitution laid the framework for the state to develop the world’s longest operational constitution.

“We are a people —and I think, you know, for better or worse, we still have some of these common threads today— were people who were distrustful of government,” Lathram said. “And we really wanted to create a system where any significant decision got to be decided by the voters rather than the representatives of the voters. And that led to a lot of the problems. It certainly disenfranchised African Americans. It disenfranchised poor white persons as well. It disenfranchised women, because of course the power was all concentrated in landowners and landowners were a single demographic in Alabama in 1901. So almost from the day it was ratified we’ve had to work to change it.”

When students are studying the Alabama constitution, Lathram said, and they come across the outdated racist language without the context that it has been nullified, it makes an impact.

“What I think is exciting about this, why this helps change the trajectory, is that when you have a middle school or a high schooler who’s learning about their state and about how it operates, and they pull out their state constitution, without somebody sitting there to help explain it to them, and they hit section 256 and see that our governing documents still talks about keeping schools separate by race— that does something to their mind, right?” Lathram said. “Whether we realize it or not— I’m not saying it changes the trajectory of their life, but it has an impact on them.”