For historians, context, if not everything, is close to it. Gov. Albert Brewer’s brief term as Governor of Alabama occurred in the context of the so-called “New South Governors.” They came from both parties and were renowned for their repudiation of narrow partisanship, their attacks on political corruption, and their support of increased funding for public education. Georgia’s Jimmy Carter, Florida’s Reubin Askew, Tennessee’s Lamar Alexander, Mississippi’s William Winter, were prominent examples. Many of them were deeply though not ostentatiously Christian: Askew was a faithful Presbyterian who did not swear, drink alcoholic beverages, or smoke, and in fact was sometimes satirized as “Reubin, the Good!” And you already know about Baptist Jimmy Carter despite that PLAYBOY admission that he had lusted in his heart. In every case they rejected racial and class-based demagoguery despite its appeal to wide segments of their electorates. Reubin Askew famously defined a leader as “someone who cares enough to tell people not just what they want to hear, but what they need to hear.”

The closest Alabama has come to one of those transformational leaders is Albert Brewer. As most of you know, he served only two years of Governor Lurleen Wallace’s term after her death. So, historians can judge him not so much by WHAT he did, but what he promised to do if elected to a full term.

As many of you know from my books, I am generally not a fan of Alabama governors, most of whom earned their obscurity or opprobrium the old fashioned way: they worked hard for it.

A pivotal moment in the state’s history occurred in the middle of the George Wallace years when term limitations and his own presidential aspirations caused him to convince his reluctant wife to run for governor. As their daughter, Peggy Wallace Kennedy, will explain in a stunning memoir scheduled for December publication, Lurleen accepted this unwelcome task despite a childhood of psychological abuse, her surgery for ovarian cancer, and her husband’s womanizing. After confronting the horrific abuses within the state’s mental institutions which the Supreme Court ruling in WYATT V. STICKNEY revealed, the entire structure of state government understood that draconian changes had to be made in state revenue and reform. In the interregnum between her election in 1966 and her death in 1968, Brewer worked tirelessly to organize the legislature on behalf of all the systemic reforms that had for so long been sacrificed on the altar of white nationalism. Though given our political history, many of you will not believe me, that legislature contained an unprecedented number of dedicated, visionary public servants who wanted to tackle the state’s REAL problems. Furthermore, the chief obstacle to that agenda, former Governor George Wallace, who was obsessed with his own immodest ambition to become President of the United States, abandoned the state for Michigan, Wisconsin, Indiana, and Maryland, where an assassin’s bullets ended his dream of becoming president (which , incidentally, no longer seems so fantastical in 2019 as it did in 1972). Wallace hoped that legislative leader Brewer would work with the sometimes independent-minded Lurleen, and he promised Brewer that he would not run for another gubernatorial term (Alabamians were to learn shortly not to pay much attention to what politicians promised and also that lying didn’t carry much of a penalty).
Wallace, of course, needed control of Alabama’s statehouse to leverage money from those who wanted to do business with the state and to assure the assistance of a variety of state troopers and other civil servants in his national campaigns, and thus reneged on his promise not to run.

As a result, the 1970 gubernatorial campaign was arguable the dirtiest in Alabama history. Collections in the state archives contain more than enough evidence to make any decent person look for the first barf bag they can find once leaving the building. In one of Alabama’s most amazing ironies, Charles Woods, a horribly disfigured World War II Air Force veteran, barely won enough sympathy votes to prevent either Brewer or Wallace from winning the race on the first ballot, though Brewer led by a substantial margin. In the run-off, Wallace unleashed all the worst demons that reside in this state (and, I assure you, the number of such demons from Reconstruction to the present is vast).

What I am convinced would have been one of the most progressive eras in Alabama history under governor Brewer was instead just more of the same old demagoguery and corrupt special interest politics, where we blame all our troubles on outside agitators, liberals, and Federal judges. Albert Brewer offered us a different path to the future: massive changes in educational funding and policy; racial fairness; civility; a new constitution. And he already had organized the House and Senate leadership to launch this journey toward a new and better Alabama.

At the beginning of my remarks, I emphasized the religious origins of many New South governors. I did not have to remind Albert Brewer that the second most frequently mentioned subject in the Bible after condemnation of idolatry was condemnation of injustice. He had read the Bible, taught Bible classes, listened to prophetic preachers at Decatur’s First Baptist Church just as I had at Parker Memorial Baptist in Anniston. He knew where to find the origin of the beloved community that Jesus envisioned in Matthew 25 (where we care for widows, orphans, and the poor, feed the hungry, give water to the thirsty, visit the sick). And despite every opportunity to wallow in the gutter with George Wallace in 1970, he refused to lower himself to that level.

Hurt deeply by exposure to the worst Alabama politics has to offer, the soft-spoken Brewer struck out in a new direction more compatible with his reliance on reason, good sense, civility, and the future rather than the past. Indeed, it was those qualities that served him so well after 1970 that had doomed him to political defeat. He simply was incapable of believing that people could lie so blatantly, wallow in the political mud so happily, violate all vows to marital, moral or human decency so cavalierly.

In the final stage of his life, all these positive qualities made him in my opinion the best FORMER governor in Alabama history. He served many years as a trustee at Samford University. Samford president Tom Corts and Brewer worked so closely together that they formed a backstage duet for just the sort of Alabama Brewer had spent his life trying to establish. The two of them inspired creation of the Public Affairs Research Council of Alabama with headquarters on the Samford campus, which is the only source of independent data about the state I trust. He was the founder and driving force for Alabama Citizens for Constitutional Reform. He was a key backer of the Alabama Poverty Project (now Alabama Possible), also initially headquartered at Samford. Brewer lent his name and influence to the A+ education reform coalition, Voices for Alabama’s Children, and Alabama Arise. If you did not already know all this that is because Governor Brewer never called attention to himself; it was his causes that mattered. He was quite content to begin some transformational group, support it behind the scenes, help raise money for it, endorse it publicly when called upon to do so, and to let someone else assume leadership and receive credit for its accomplishments.

Governor Brewer knew Alabama and Alabamians, and he believed we are better than we often act and vote. I was more of a Calvinistic Baptist who concluded that in a democracy we generally get the kind of government we deserve. So he was a wonderful tonic to my cynicism. He was a builder, not a demolisher. He appealed to our higher angels, not to our fearful demons. He was that rare Alabama politician who was willing to lose an election rather than besmirch his honor. He had as keen an historical vision as anyone I have known in the state’s public life. As a prophetic statesman, he opted always for the long view of history rather than the near view of successful politician.

I choose to end this homily not as historian but as Baptist Sunday school teacher. This is a paraphrase of the Apostle Paul’s introduction of his most loyal disciple to the church at Philippi. But I think God might have had this in mind when He sent Albert Brewer our way: “I hope to send {Albert} to you . . . . There is no one else here who sees things as I do and takes a genuine interest in our concerns; they are all bent on their own ends not on the causes of justice and fairness. {Albert’s} record of service is known to you; he has been like a father to us all.” He might even deserve designation as “Albert the Good!” 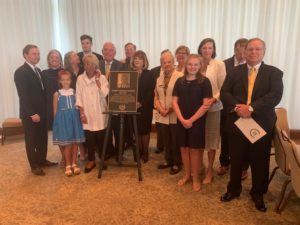